With the heat and haze, we decided to do an indoor weekend, and checked into the newly-opened Blue House Infant & Toddler Atelier at UE Square.

The 2000 sqft “Reggio Emilia inspired” space has beautiful high ceilings and was awash with natural sunlight. It’s not designed as a soft play space, but meant to have an environment similar to an interactive children’s museum.

I was dubious when first walking in, that this quiet-looking space could successfully engage my boisterous, hyper-energetic (bouncy-castle fanatic/ toy-maniac/ car-crazy) Bubu.

The space was was filled with little nooks and self-play activity corners,  utilizing natural materials and ordinary little things (like a whole bunch of zippers on a table, and a wicker basket filled with all kinds of bristles and brushes).

Once he got his socks on though, he was off and exploring! Here is our story in photos:

The space is welcoming and homely. The umbrellas hanging overhead are a nice touch to add interest and color, using natural, everyday objects to harmonize with the theme of the space.

There’s a structure on one side that looks like a spaceship, which Bubu refers to as “cable car” (not sure why)!

This is the view from inside the “cable car”.  There’s a Lightbox Pod, a cushioned area by the window, and a play area with cushions on the floor next to a projector (which comes on intermittently, and is fun for shadow play). 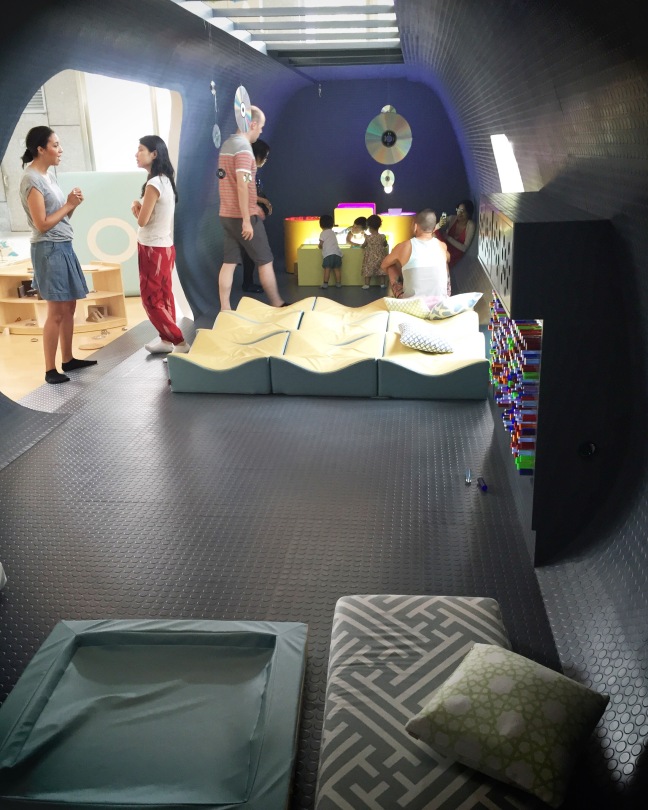 He soon discovers the objects provided for interaction with the lightbox pod and proceeds to arrange and stack them. 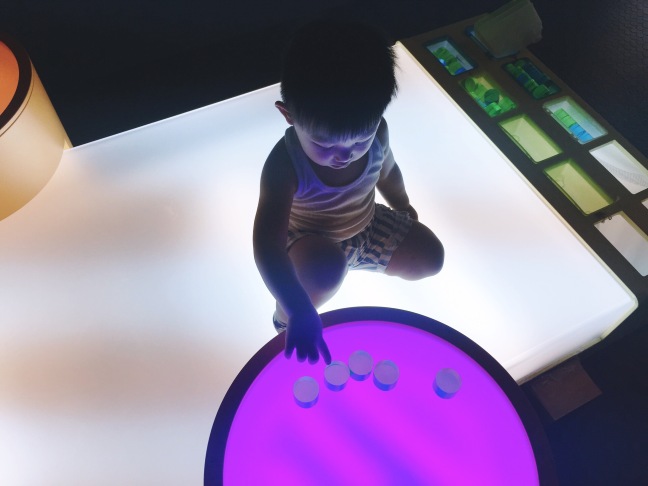 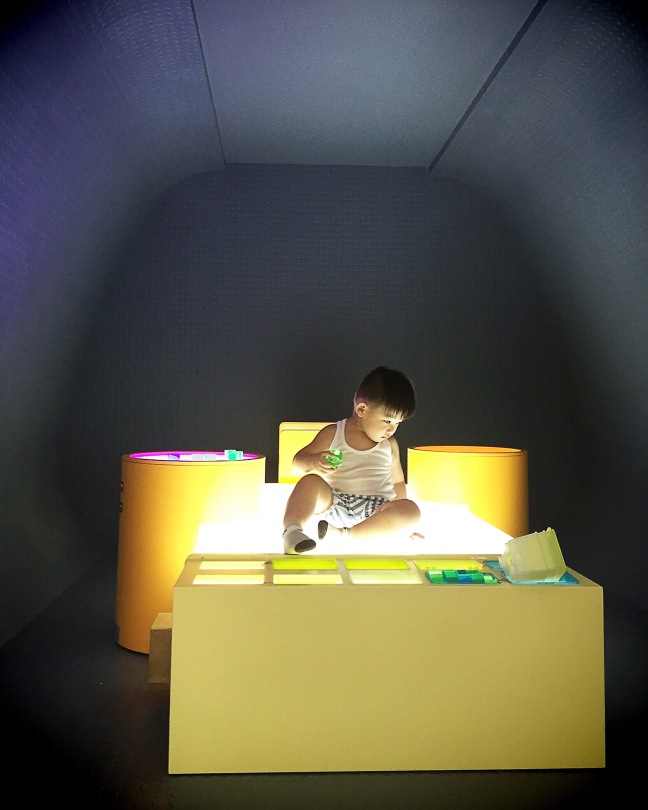 Here’s another view of the space, it’s great that it is not crowded (even on a weekend afternoon which is when we visited), and not filled with screaming, sweaty, over-stimulated, adrenalin-crazed kids (which is what happens to Bubu when he’s been in a baby gym for about 45 minutes… He starts to look like one of those loony tunes characters with spirals in their eyes). 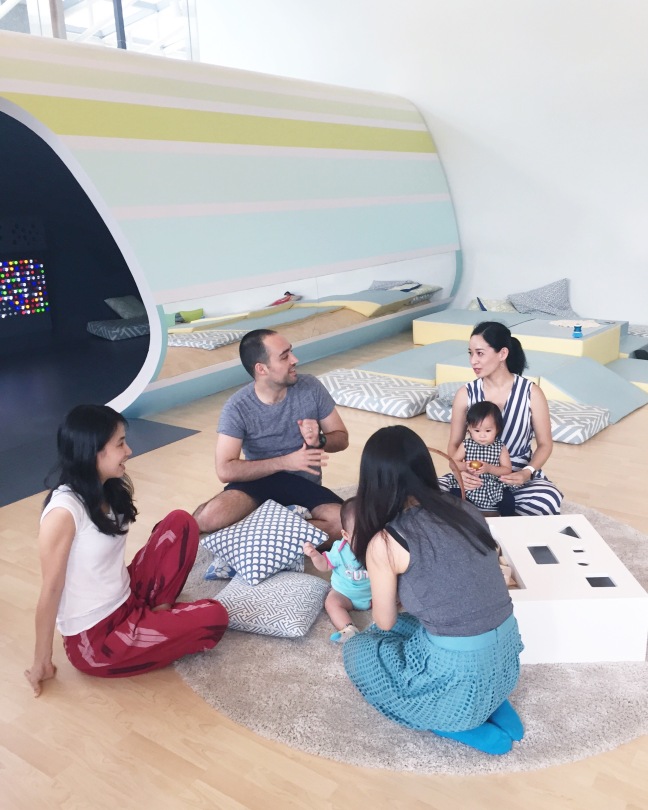 The space also encourages interaction among parents, creating quite a warm, cosy community.

A half hour later, he ventures over to rest and roll around in the cushioned play space next to the window. He befriends someone’s grandpa there, and they share cushions.

After a breather he’s up and about, “Hmm… What shall I play with next!”

Next up, he’s captivated by a wicker basket filled with brushes and bristles of all types – from paint brushes large and small to hair brushes and even a bristly shoe brush (at least that’s what I thought it was!)  He plays with the brushes against the curved surface of the “cable car”.

Finally, he adopts the wicker basket and carries it all around. He also explores the projector wall, and plays with the random objects scattered around the space.

Before we know it, we have been there for 90 minutes and it’s time to go!  He hasn’t even explored a quarter of the space, and we felt like we could have spent another two hours there.

What’s amazing is he wasn’t sweaty and exhausted like when we leave most kiddy play gyms. We did have a hard time getting him to leave his favorite play area though – he flattened himself out on the lightbox and gave us his sad face. 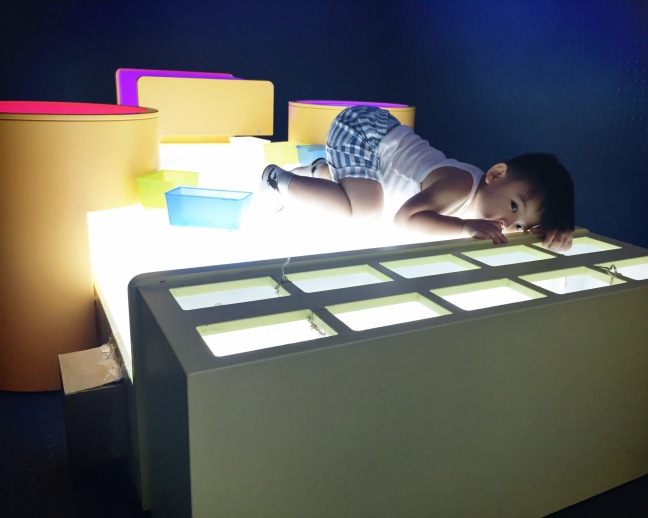 We assured him we would be back to visit the “cable car” and with that it was a wrap!

Despite engaging him with quiet play and exploration, it still did its job, it tired out my toddler who conked out for his nap after… Bravo! Plus points, Blue House!

Verdict:  We paid $25 for two hours of play, it’s designed for kids ages 6 months to 3 years. A great place to spend a couple hours if you’re looking for somewhere air-conditioned to entertain your little one, and a highly-recommended alternative to baby and kids gyms (this is like an organic salad bar compared to the McDonalds that are those baby gyms!) You are actually also able to have conversation with other adults and relax a little as your kids aren’t tearing around like crazy banshees. Only drawback (and this is unfortunately huge for me!)… They have no cafe and don’t allow food and drink in the atelier. Which is great, yes- the space is kept grub-free and crumb-free… But waaah, NO COFFEE! Almost perfect – oh well!

The Blue House Infant and Toddler Atelier is located at #01-35 Office Block, UE Square. (There isn’t much signage, so my best advice is to head to street level and walk on the outside, it’s along the same road as Liang Court next door.)