Like many three year olds, mine adores Bob and his machines, especially that yellow digger called Scoop.  We sprinted here after we came across Diggersite when a friend shared a link. They have no website (at time of post) but they have a Facebook page.

Diggersite is located at 1020 East Coast Park #01-04, between a Burger King and a Prawning place. He could hardly contain his excitement when he saw the diggers, and wanted to jump in one right away!

There are a total of six diggers in three stations, two outdoors and one indoors. They are working small scale replicas of actual diggers.

We started at this the station where you try to swing the digger arm and knock down the bottles – or at least that’s what I thought! It hardly mattered, he was just excited to sit in one and rotate left to right (I will be uploading a video clip in my IG @tjinlee if you want to see this)! 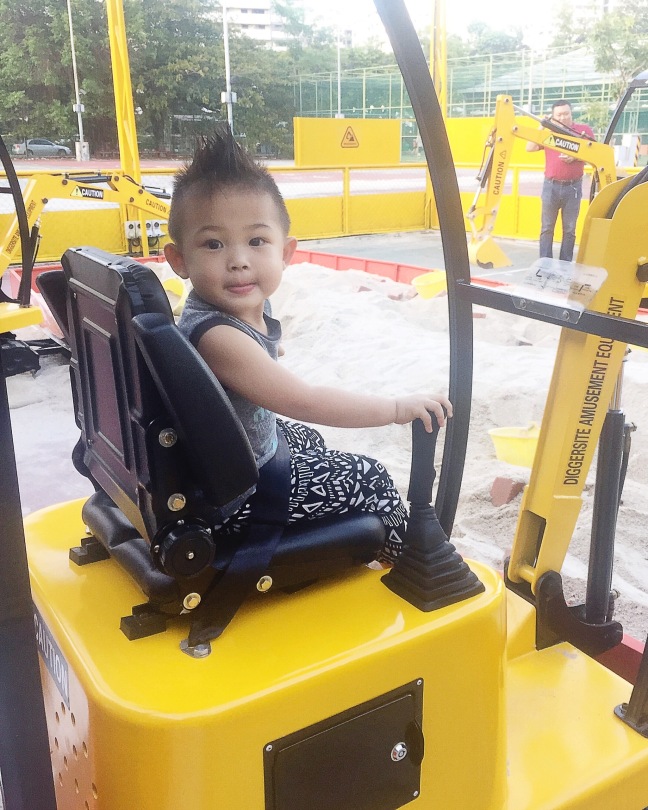 His face when the ride stops. 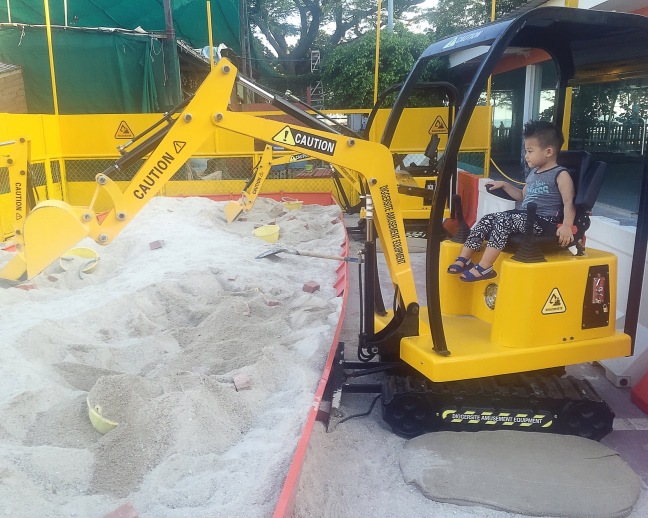 We venture out into the excavation site where there were three diggers set around a sand pit filled with bricks and buckets.

He was not so enthused when we were told it was advisable for me to ride with him, as he was too little to really operate the digger.

(I’m not in my builder attire as we came straight here after a day of back-to-back work meetings for mama – my attempt at work-life balance, and highlight of my day.)

We attempt to operate our digger and were able to rotate the machine, lower and raise the digger arm and scoop and pick up and dump sand. It revealed to my son that his mother is not terribly coordinated nor good at remembering  which lever swiveled which way to go up, down, tilt or rotate…

Meantime, in the digger opposite us, a far more coordinated father-son duo were busy and efficiently scooping sand into the little buckets in the sand (show offs)!

After 5 minutes of riding with me, I decided to let him have his own ride. He enjoyed just sitting in it and pushing all the levers around, looking like a real pro! 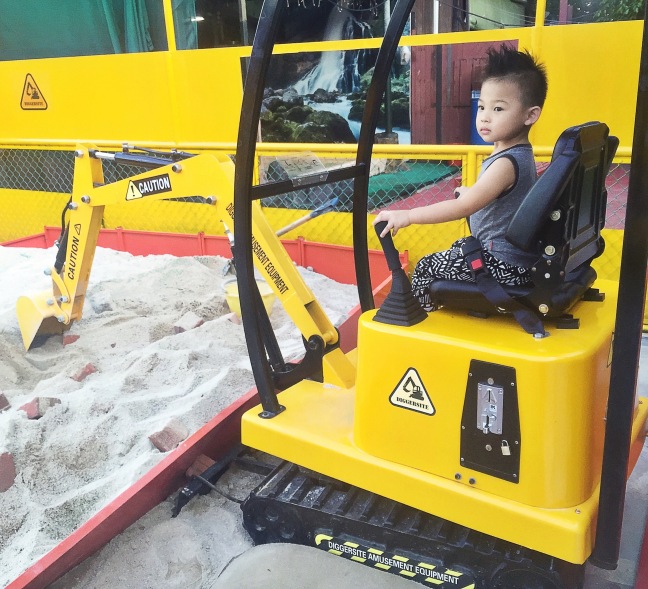 There are bricks scattered in the sand so you can also attempt to pick those up with your scoop.

After two rides on the excavator diggers, we head indoors to try the claw digger, which is like a giant version of the amusement park claw machine.

I coerced him into wearing the construction hat (there’s also a vest but he’s not that cooperative), which you can loan without charge when playing with the diggers.

It’s really hard to operate these indoor diggers if you’re three years old – or maybe my son just inherited his mother’s lack of coordination skills. As before he just really enjoyed sitting in the digger and pulling all the levers, so it was great fun nonetheless!

His face (again!) when it stops.

The biggest tip I can give you is to come on a weekday. I read that they are really crowded on weekends, and it can be a very long wait for an excited toddler who can’t wait to jump in a digger, to have 3-4 other kids queued up before his turn.

Diggersite opens from 10am to 10pm, and there are floodlights at night ensure the place is bright as day, without the scorching heat and sun.

We had an awesome end to the day with OJ at Burger King, followed by the discovery of these four seater family bikes in the rental place next door where toddlers can sit up front with their own steering wheel…But that’s another story.