We had no expectations at all, when we made our trip out to the Singapore Air Force Museum, as there’s little coverage on it online. I expected a couple of old airplanes and a helicopters, instead we discovered an expansive playground full of vintage airplanes (about 10-12 real planes and helicopters) which the kids could touch and explore. 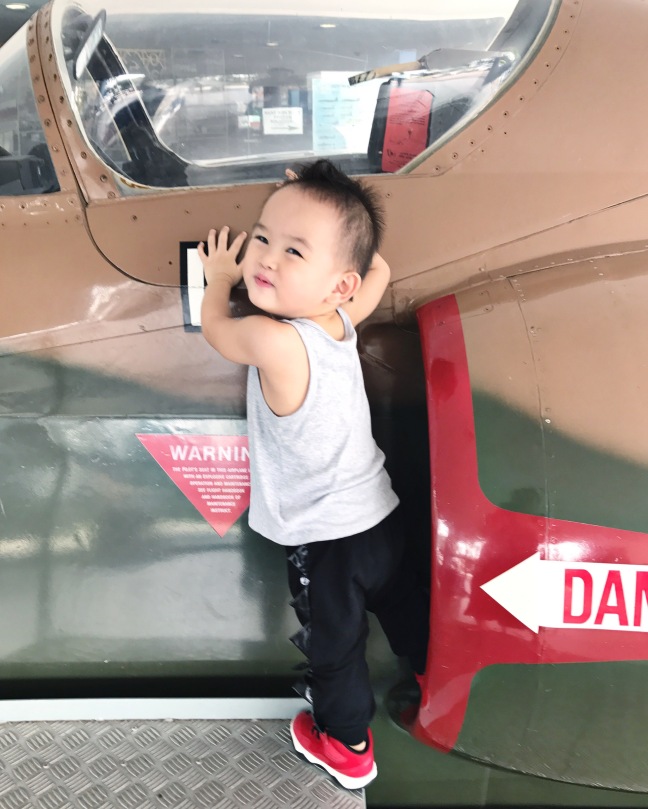 There was also an indoor gallery (air-conditioned, thankfully) with touch screens, airplane simulator games, lots of little aircraft models, a mock control tower panel overlooking the “airfield” downstairs and more. It’s not a big museum, but the boys loved it, especially as four year old Tyler is an airplane addict!

We had some difficulty finding it (400 Airport Road), there are no signages (only one little signage which is pointing in a confusing direction) and if you take a wrong turn you could end up on a KPE or PIE which takes a lot of long U-turns to get back. It’s actually located next to, just after, the Paya Lebar Air Base.

Once we got to the gates of the Museum however, we were delighted by the visual display of all kinds of helicopters and fighter jets in the carpark area, and it only got better from there.

The carpark, which had many lots (all empty on the day we visited) with free parking.

Helicopters in the carpark 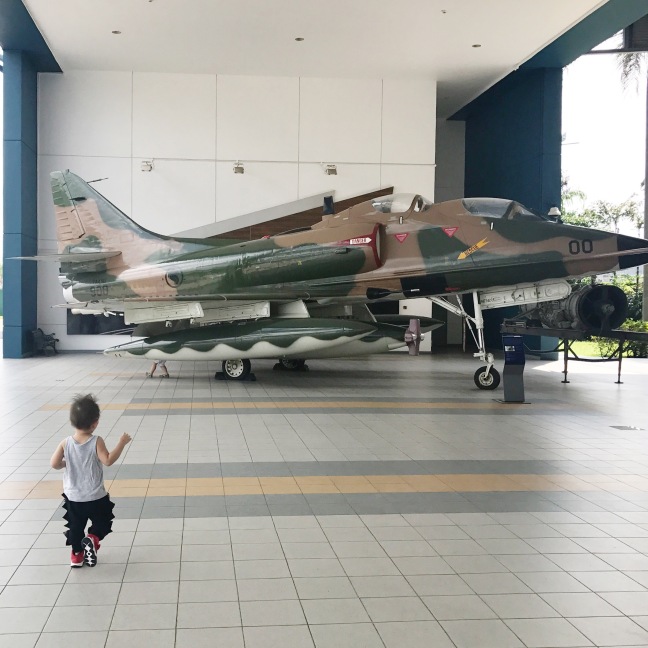 The boys were ecstatic to see the planes and couldn’t stop dashing about from exhibit to exhibit. There was no one around at all, perhaps a guide to explain what the planes were about might have been helpful. The boys had so many questions about the aircraft, I confess I made up a lot of answers (and the boys now think the airplane missiles are all engines hahaha) ! 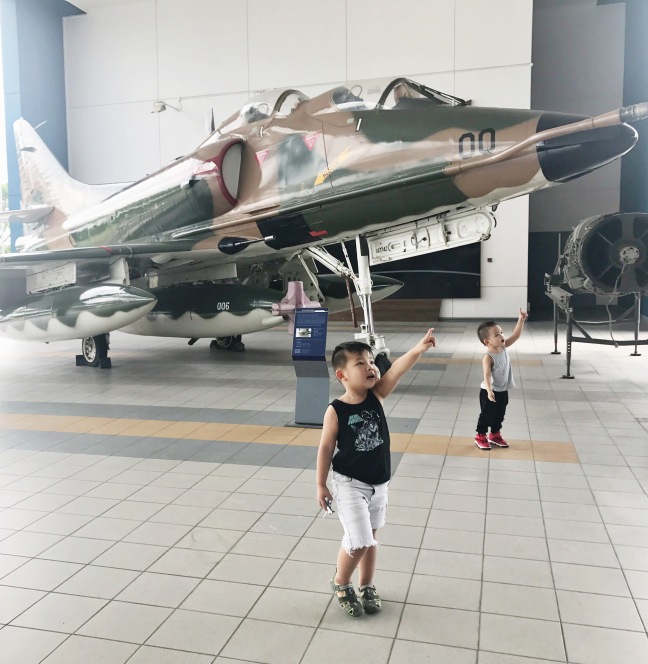 So much to get excited about!

Most of the planes seem to be from the 60s, 70s (my hubby says) and and are decommissioned aircraft. Don’t expect the modern planes that you see in Army Open houses, but given that there were no queues or crowds at all, and the boys didn’t have to jostle for even a glimpse of a plane or queue up to take a photo – this was paradise for them.

Hands-on fun and exploration. The open-air area is sheltered and was breezy on the day we were there. 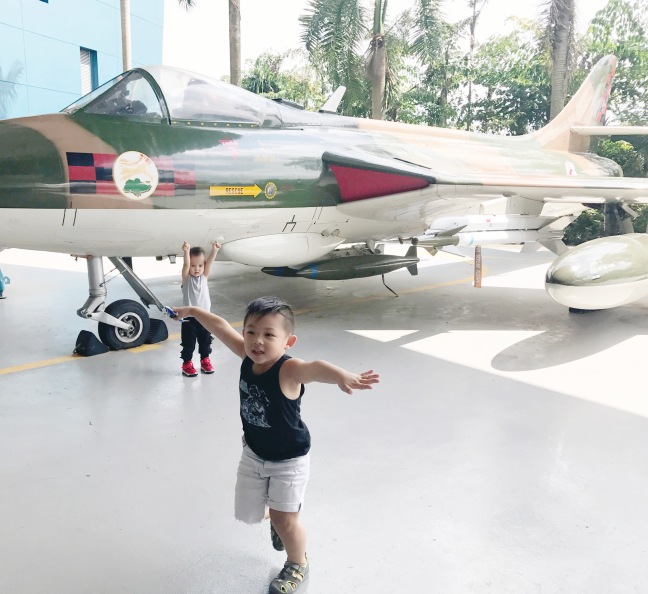 Plenty of space to run and explore!

Nose to nose. They may not be the newest aircraft but to a four year old and a one year old, they were the most fascinating planes in the world! 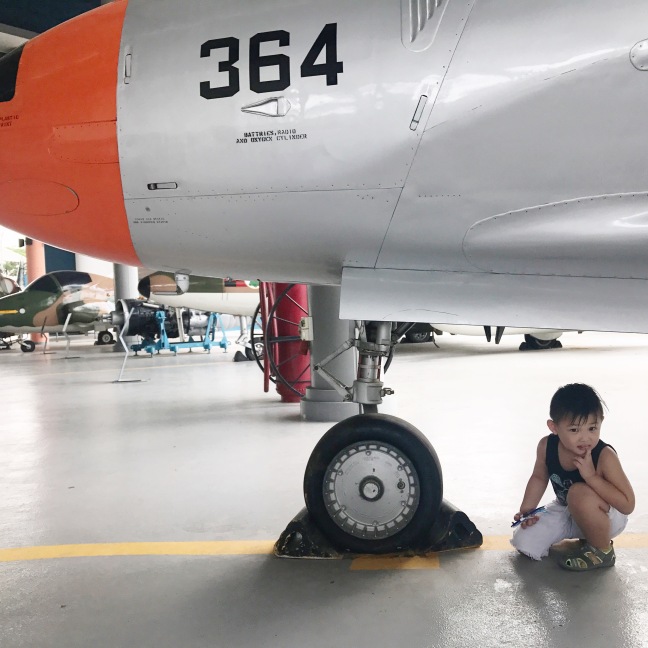 He finally gets to see where the wheels go when they fold up.

Reaching for the sky! No one to tell us not to touch this or that, like in many museums. The boys had a blast!

So many airplanes to run around (and under!) 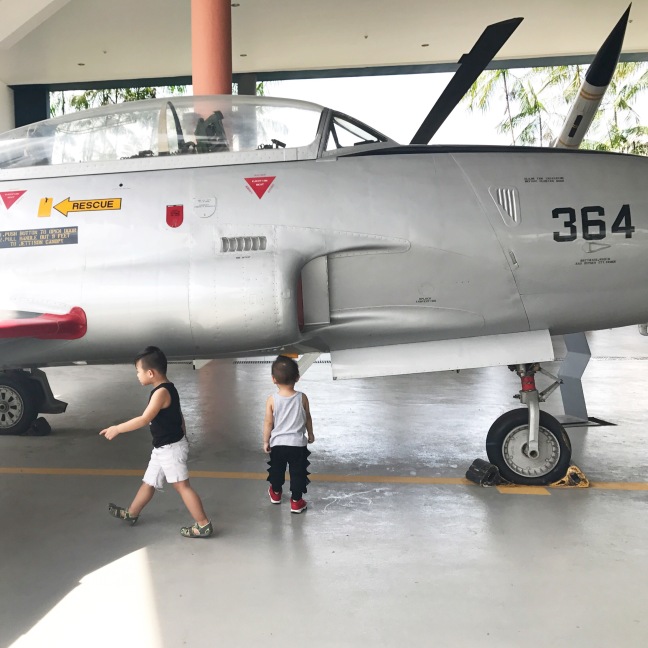 We headed into the indoor galleries to check out the exhibits. 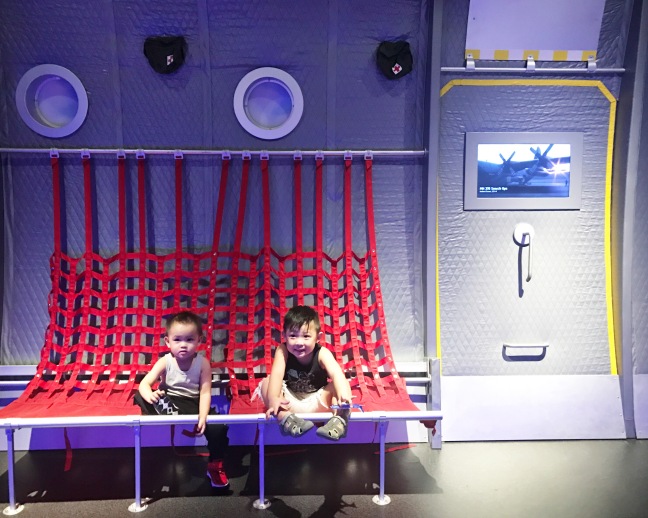 Pretending to be paratroopers inside a C130 “Stand up, hook up, shuffle to the door”.

In the flight seat.

Like being in a control tower where you could view all the airplanes. So cool. Wish the museum would just place a child-friendly stool on it as he was just a little too short to see the window and I had to carry him up. He got upset when I put him down…  hope someone from Mindef can read this and spread the word…

A thrilling morning out for the boys. We spent about 90 minutes here, but the boys were upset when we were leaving. They had never got so up close to real military planes (or any kind of planes on the ground, really). There was no one there, but us – maybe one other lady just walking around and taking photos… Spy? Haha… and an old caretaker who was so excited to see actual visitors he insisted we sign into his guest book. He told me visitorship numbers were low (not surprising as there’s little publicity).

The Air Force Museum was a wonderful escape for the June School holidays, where every other museum was packed with school groups. It’s free entry, free parking and opens from 830am to 5pm daily (except Mondays and public holidays).

Definitely worth a visit, and next time, I will return with the kids’ scooters (which may or may not be allowed, but given there was no one else there at all, and so much open space), it could be a lot of fun!

So much fun that they didn’t want to go home….. 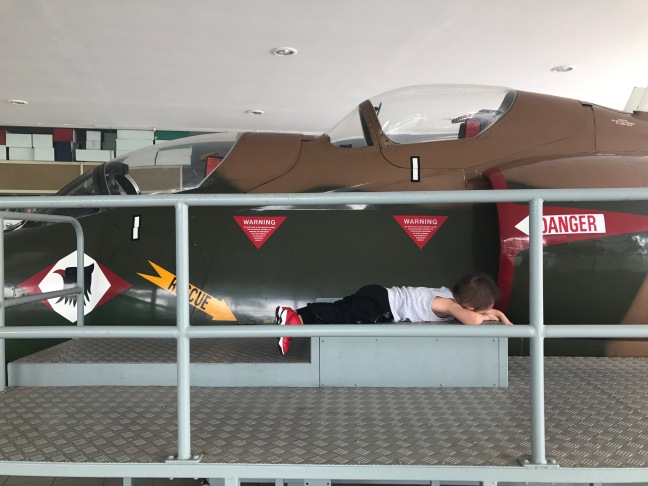