Travel is the best education I can give my kids, there’s nothing like witnessing and exploring in real life vs through textbooks and classrooms. It’s important for children to experience and see the world through different lenses, and understand that the world is filled with wonder and diversity.

Here are the best tips and hacks I can share on flight-planning having organised close to fifty trips with the kids. It’s not about spoiling the kids with luxury travel, but about finding the best way to travel that lets you have more space (and sanity), and giving you travel options you may not previously have considered.

This is seriously, one of my favourite hacks, flying out to Europe. It’s also led us to discover many cool cities which we may not otherwise have intended on visiting.

It can cost HALF the fare if you’re flying out to “second-tier” cities, like Oslo, Stockholm and Helsinki, vs busy, “in-demand” (read “expensive”) airport destinations like London, Paris and Milan. So do some travel research, scroll through the fares, and you’ll see for e.g Round-trip Q-suite tickets on Qatar Airlines from Singapore to Oslo were SGD4,400 each, comparatively, the flights from Singapore to London were approximately SGD6500 on Qatar (and about $7-8k on SQ).

Different airlines have different policies on cost for “one way”, for eg I never book Singapore Airlines one way if I can help it because their one way fare is about 70% to 80% of their full fare, whereas Qatar charged exactly 50% of their round-trip ticket, for a one way fare from Asia to Europe.

Once you’re in Europe and USA, one-way tickets are very common, much like how Budget Airlines operate in Asia.

Ok, so now you’re saying “one way”- how would we get home? This is the best part!

Domestic flights within Europe are relatively affordable (eg flying to Iceland from Oslo costs SGD$250 a ticket, and to Paris from Oslo was SGD$360 a ticket). There are so many destinations within easy reach from airports like Stockholm and Oslo, eg we could have chosen Barcelona, Greece or Portugal, many for less then $300 each once we were in Europe!

These are mostly short flights, 3 hours and below (like flying to Bali from Singapore). Another big tip – NEVER opt for business class for these “domestic” routes; you’ll pay twice the price for pretty much the same economy class seat, just the first 3 rows with a little curtain across and an empty seat placed in between (blocked out) so you have more space. They don’t serve you food (you get nuts and biscuits). They’re similar to Budget flights, even with carriers like British Airways, regional flights are like their version of Scoot.

So, the biggest perks are, you get to fly and return from different destinations, and you get to see more than one city!

Now that you’re all caught up on tier 2 cities and the benefits of flying one-way… Don’t we all love it when scoring Saver point redemptions?

With cities like New York, LA, London and Paris, it can be a waiting game even when booking way ahead, like 10 months before flying. The biggest frustration can be one way confirmed, and you never know if the other one on wait list is going to come through. I’ve waited up to a week before a long-haul flight once, and ended up having to buy the tickets, and paying 25% more.

Anyway my point is, round-trip redemptions are unpredictable which can make it hard to plan ahead. The GOOD NEWS is one-way redemptions are much easier to come by (well, literally 50% easier to get one leg vs two on a hot destination). So what I did this trip was, first I tried to get round-trip tickets to London, as I knew that was definitely on my list, and when I saw I was cleared on the return half, I booked just that, using my points, and proceeded to book the flight up from Singapore to Oslo for the outward bound.

Another tip, although this should seem like common sense by now, redemptions are waaaay easier to less popular destinations, eg I could book Oslo Business Saver on SQ immediately when searching the fares 3 months ago (it’s probably a code-share as they don’t fly direct). I could have redeemed the flight to Norway fully, but I decided that I would much rather pay $2k per business class ticket getting there, and save my points for when I really need them.

So, this is how both Tyler and I flew to Europe and back on Business Class on top airlines for only $4,400 (on Q Suites to Norway, and SQ redemption home)! 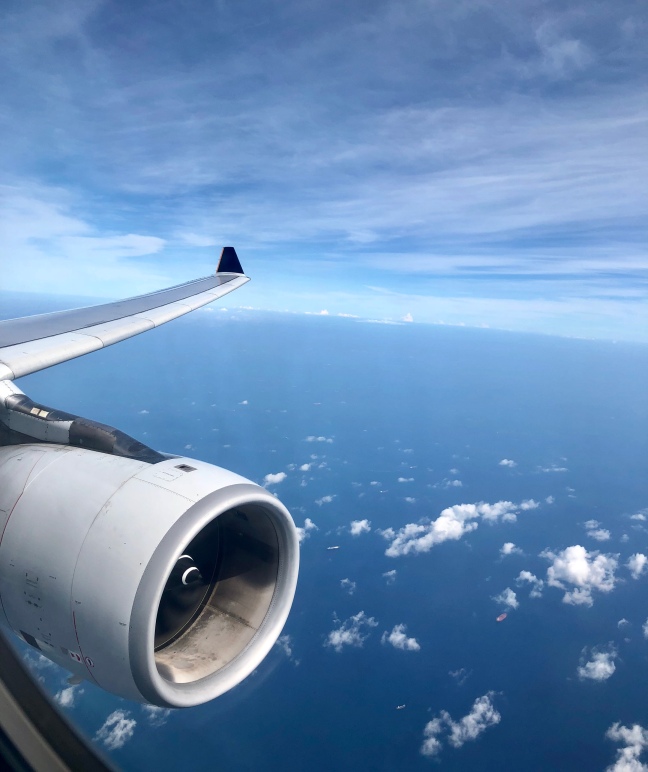 In contrast, I actually welcome the stopover if flying economy, I get to stretch my legs. On this note, some airports are way more efficient and pleasant than others. It may help you to decide for example, to fly Qatar over Turkish Airlines (which IS incidentally Star Alliance, but that transfer in Istanbul nearly cost us our sanity with crazy, long transit queues as if 10 flights had just merged for transfers and were bottlenecked through one screening area. It was literally a war zone with people screaming out their onward destinations, all fearful of missing tight connections, some did). Doha on the other hand was a breeze, smooth traffic, clear signage and no lines. I also like Korean Air as an airport transfer option, they’re usually also about 20% cheaper on fares than SIA (eg I always book Korean Air to Niseko, as the airlines fly direct without you having to transfer luggage in a stopover, and the business class flight was a flat $2,000 which makes a big difference when flying red-eye) and the transit in Seoul comes with lots of kids play areas – like having complimentary Pororo Park-style play zones inside!

Okay, so Business Class is pretty costly whichever way you look at it; another relatively wallet-friendly option, and our favourite one, is to book an extra economy class seat when we travel longer than 6 hours.

We booked 2 extra seats when flying our whole family up to Zurich earlier this year, so Daddy and Tyler could have one row, and Mommy and Jake could have a row. As you can see, it makes a huge difference, you have so much more legroom and space to store stuff, and during meal service, an extra table to put things on, or space to access stuff without having to juggle trays. It’s also much less expensive than four business class tickets!

You can’t book an extra seat online, but you can call in to the airline to add on an extra seat or head down to their office. I’ve found it can make a huge difference, you’ll be thankful for it on a totally full flight. With more code-share flights these days, it’s become rare to see empty seats on planes. Rather than praying and hoping the seat next to you isn’t taken, I prefer to buy the extra seat as an insurance policy. If you calculate, 6 economy seats are also much less costly than 4 business class seats (approx $8k vs $24k when we flew to Zurich from Singapore earlier this year).

I expect I’ll be deploying this hack more and more often as the kids get older, as I don’t want them growing up expecting to fly business class. For now, it’s more peace of mind for mommy, and they can’t yet travel alone!

So that about sums up a whole bunch of travel tips I swear by! I hope it’s helpful to you Jetset Mamas (and papas)! Getting to your destination is part of the journey, and traveling with under-fives can be a big challenge. I hope this inspires more of you to see that the flight doesn’t have to be something to dread, and that planning with new routes and unexpected destinations is actually part of the fun!

Now, go plan your next adventure!

Bon Voyage! This little one looks forward to our trips!

The currency I’ve used is SGD (Singapore Dollars, approx $1.38 to $1 USD at time of publishing.) Ticket prices and airline policies may also change over time, but these are all correct as of present.

2 thoughts on “Flying with Kids: All You Need to Know about Choosing the Right Flight, Airline and Route to Suit your Budget”